So who made up the rule that there are ONLY twenty-four hours in a day?  Because that isn’t enough time especially if you want to…like…sleep. Too.

I’ve been a busy missy and haven’t had a chance to write a blog for a while. But I think about you, my online family of fellow human beings, and hope you are doing okay. That you are slurping chicken soup as needed, smiling at a stranger at the grocery store, needed, and hopefully strumming your ukulele lots. NEEDED!

I’ve been writing lately, but not stories…

Instrumental music, of all things, and here’s the deal:

You can imagine my shock, as a singer-person, to learn that some people don’t want to sing. I hope you are laughing—a little—because fundamentally it’s kind of sweet. I know how good it feels to sing, to make a noise, and I figure everybody wants to feel good. But some of my ukulele students want to keep their mouths shut and play a cool melody on the uke instead.

So I’ve gone a-hunting for simple songs, knowing that I want folks to learn to read notes and come up with their own chord melodies. That’s the piano player in me talking. Give me a note, I can give you a chord.  Give me a chord and I can give you a song!

But I haven’t found any that flutter my heart. So I’ve written a bunch of ukulele-friendly songs myself and they are gorgeous and I’m putting them into a book. News Flash—this is going to take a while. I’m just copyrighting them now. My patient husband Craig is doing all that Sibelius computer stuff and abracadabra, we’ve got sheet music with tablature.

I had a chance to play one of my favorites, Whirligig Waltz, at the recent NAMM show in Anaheim, amidst the “whirl” of thrumming sounds and swirls of people.

Craig snagged a video as I balanced a really cool Tenor Fluke on my thigh and played in the Magic Fluke Co. booth on mellow Sunday (that’s a joke).

Some of you may know that I played in piano bars for twenty years and that’s where I learned to “tune out” distractions, to put on the metaphorical blinders so to speak, and make music. Distractions like…televisions blaring, fire alarms going off, the hostess calling out “Peterson, party of four, your table is ready” on the house PA; the couple having sex—or pretty close–in the corner booth; the crusty dude with the well-fed garter snake slung around his neck and a beer in his hand; the bagpipe player who isn’t wearing underwear; the personal conversations whispered around the piano and I CAN HEAR YOU; people saying snarky things about me; me picturing a puddle of poop on their heads.

So that’s how I can keep right on playing “Whirligig Waltz,” impervious to the maelstrom around me. It’s a gift! And you can watch by CLICKING HERE.

I’ll keep you posted how “da book” is evolving. I already play instrumentals when I do music therapy gigs and a pretty melody on the uke can soothe and comfort. Oh those four magnificent strings.

In the meantime, I’m singing too and wanted to tell you that I’m doing a Kanikapila—a Ukulele Strum Along and Workshop at Dave’s Island Instruments in Lakewood, California, Friday February 9, 2018 from 7:00 to 9:00 P.M.

Tickets are $20 and you get to keep my arrangements of the songs we play. See the flyer below. You can record the opening ceremony of the Olympics that night on your TV and join us for the real thing—people playing and singing and making music together. It is one of the sweetest pleasures in this precious life. 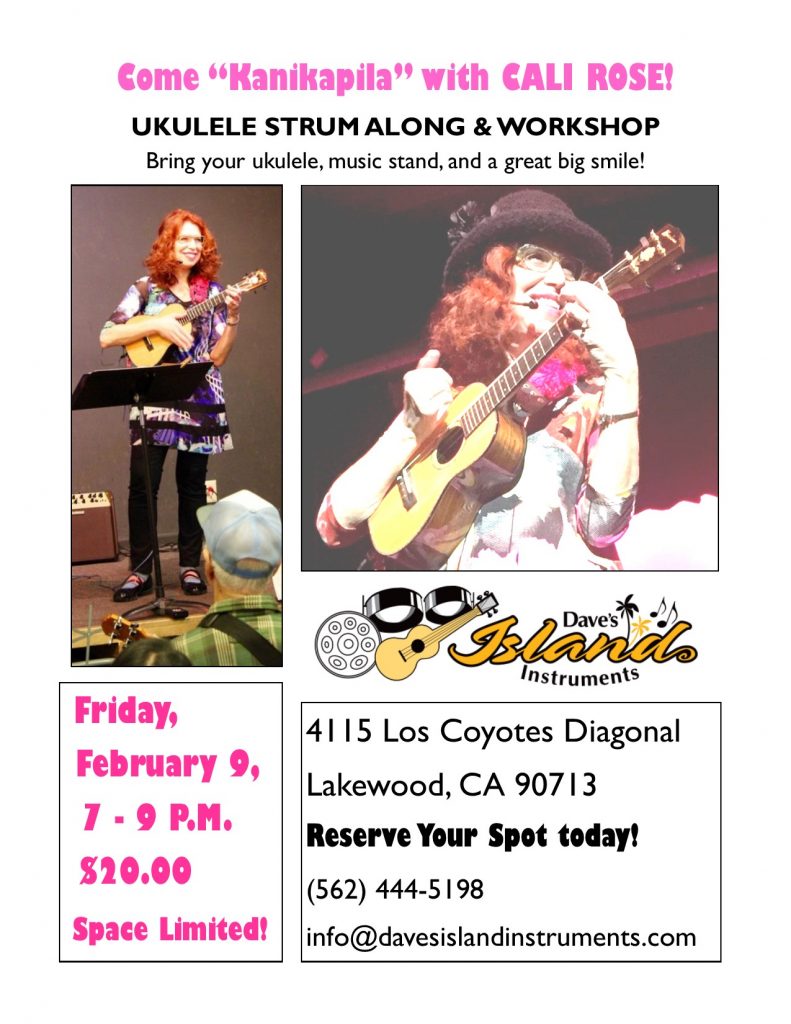