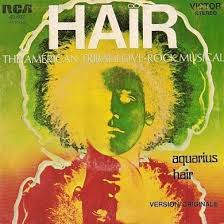 When I write my blogs I can go all deep into philosophy-land and oh yeah, there was that heart attack thing… But not today. This story is about buying a ticket to see naked people sing and dance…

Apparently some astrologers report that right now is the dawning of the Age of Aquarius. To be sure, I suspect a few are also saying “nuh-uh.” As for me I tell myself, “that’s entertainment.” I bring this up because when I hear the reporter talking about this new age stuff on my local NPR station I don’t glom onto spinning moons and planets. No-no. I start humming the iconic Aquarius song from Hair, the hippie musical that opened on Broadway in 1968. “The CC Strummers can do this on the ukulele,” I proclaim out loud as I’m foraging through the fridge for a snack.

But then I fall backwards in time and land at THAT matinee at the Aquarius Theater on Sunset Boulevard in Hollywood. It was an afternoon that shook my world. By then I had worn out my New York cast album of Hair and, in the process, learned the words to every single song in the show. My parents probably thought I had lost my mind as I skipped through the house singing “Hare Krishna, Hare Krishna” or “gliddy-glub-gloopy, nibby-nabby-noopy, la-la-la-lo-lo.”  Um, whatever that is…

So let’s just say that I was familiar with how this musical rolled, especially that infamous scene at the end of Act One where the cast gets naked on stage. You have to understand that in my repressed nuclear family we didn’t talk about body parts and all that doing-what-comes-naturally kind of stuff. It’s not like we lived on a farm and every season beheld the circle of life. I know it’s hard to imagine daily existence before the age of the internet, technicolor jpegs, high resolution videos. And Bridgerton. I remember a late night slumber party where my girlfriends and I tore through an absconded copy of “The Naked Ape” and wailed in horror (mixed with rabid curiosity) as the story of human zoology unfolded before us. I really wanted to see a naked person. Like, in person…

When Hair arrives in Los Angeles, I am SO there, on that blessed Saturday afternoon. The best seat I can get is way back in the orchestra section, closer to the bathrooms than the stage, but who cares. I’m living my hippy dream. For two hours, at least.

Act One. Stuff happens. Then more stuff happens. But I know that naked finale is coming. And I know when it’s here. The lights go psychedelic, a giant tarp covers the stage and undulates like canvas waves. The music rises in wild crescendos that I feel thrumming in my bones. Whoosh! The tarp snaps away and like magic the naked cast appears, posing like statues in a museum. But suddenly the lights go out in the theater. Well except for those awful flashing strobes. Strobes?

Body parts light up, yes they do, but then vanish in the dark. You don’t know what part belongs to what person. Was that a boob, a thing, an arm? The strobes flash on the audience too. Geez thanks for momentarily blinding me just as we’re getting to the good stuff. After a few anxious breaths the stage is once again flooded with light and all we see is a whole lot of nothin’.

I’m not proud to admit that I don’t remember anything else from the show except THAT. I’m sure this west coast performance of Hair was a full body immersion in sights and sounds. But I drove home, crestfallen, shaking my head at this latest brush with crushed expectations and icy reality.

Flash forward thirty-two years. To the summer of 2001. The latest revival of Hair lands back in Los Angeles at the Wadsworth Theater on the sprawling grounds of the Veterans Administration. Of all places. I have lived a lifetime or ten by then and seen plenty of naked people. (I was in nursing school for a while, so there’s that…) But I’m feeling that adolescent oh-oh-oh again as I snag another matinee ticket, which just happens to be the last available seat in the house. I am perched in the back row of the balcony, with my head leaning against the wall. At least I’m in the center. Two older women are sitting in front of me, breathlessly commiserating before the show begins.

This time I have binoculars.

Sam Harris and Jennifer Leigh Warren are the big name stars in this rollicking production. They sing and strut with their fellow long-hairs. It’s a joyous celebration as they tick off song after song before that big naked reveal at the end of Act One.

I’m looking for the tarp. Where’s the freakin’ tarp?

Suddenly the stage is lit in a beautiful pink glow as the cast members walk, like naked angels, into the light. And they sing. I think. They move gracefully. There’s choreography. I think. And every single body part is hanging out for everybody to see. You know what belongs to whom. No rushy-rushy. No strobes. Time stretches like a rubber band and…I can’t believe I’m saying this…it feels like this naked thing is going on forever. I have to pee. It also appears that it’s a little chilly on stage.

I have very good binoculars.

Then it ends. Quietly. The house lights go on. Intermission. One of the ladies in front of me leans into her friend and says, “next time we get the expensive seats.”

Click here to watch excerpts from the 2001 performance of Hair at The Wadsworth Theater in West Los Angeles.

One of the things I love about Zoom is that every player has the best seat in the house—front row center. The CC Strummers will be learning Aquarius/Let The Sun Shine In this month in our Thursday Zoom ukulele classes. Email me if you would like to join us. Thank you for getting word out about our online classes. They are open to everyone.