Today a travel-warrior made her final flight, past Venice Beach, Disneyland, The Queen Mary, Universal City, Malibu and even home sweet home, Culver City. This is Space Shuttle Endeavour’s last hurrah before she grabs the big room at her new retirement home. The California Science Center near downtown Los Angeles. Like thousands of others, I seek higher ground to snag a view of this miraculous machine, riding piggy-back on a great big 747.

But this is not my first close encounter with a space shuttle. My father was an aeronautics engineer and a fabulous writer. He signed on with NASA shortly after the Russians sent freak-out waves through the Pentagon when they launched the first satellite into space. Sputnik. The space race was on and my father worked in “public relations.” To the best of my knowledge that meant he translated techno-space lingo into…well…English. He was also privy to national secrets. I’d climb on his lap, bat my big eye lashes and say “daddy, tell me a secret.” He’d laugh, “but then I would have to kill you. Ha Ha Ha.”

My father’s claim to NASA fame was that he named the first two monkeys that went into space. And came back. Alive. According to the directive, one name had to start with an “A” and the other a “B.” The in-laws lobbied him to name the monkeys after them. That would be Abraham and Bernice.

When you see the pictures of little Able and Baker, now you know the back story. In fact the in-laws were so pissed off about the name thing (I mean get over it folks…) my father threw up his hands in frustration and moved my mother and me to the other side of the country. Los Angeles.

Aerospace was hot in the land of sunshine and my father thrived. He was here for Gemini, Apollo and the Space Shuttles. That’s when we begin our years-long ritual, my daddy and I. In the middle of night, we drive a couple hours northeast to the Mojave Desert, Edwards Air Force Base, and watch the Shuttle land.

Because my father was in the press corps, we get up close and personal with hardware and staff. First you hear the double sonic booms, then off in the distance you see a small dot in the sky that grows bigger and takes the shape of a bird. Suddenly it’s the Shuttle, gliding earthward at break-neck speed. There is desert silence when it lands and passes us in a whoosh as the parachutes deploy behind.

Then the dusty thing sits on the tarmac for a few moments before it is quickly surrounded by an assortment of specialized sniffer vehicles. 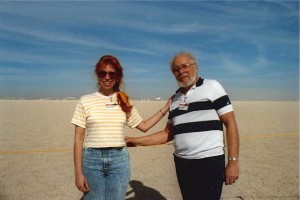 At that point my father goes to the pressroom for the flight debriefing and I wander into the gift shop to buy the latest shuttle t-shirt. The design is different for each mission and is almost always groovy in a “Jetsons” kind of way.

In 1983, we watch Space Shuttle Challenger’s first night landing. Ever. A Xenon light, as bright as a mini-sun, beckons the shuttle toward the runway. All the other lights at Edwards are turned off and the press and visitors are given green glow wands to wave (and light the way to the bathroom, I presume). It’s eerie and magical. Fast forward two and half years. It’s a Tuesday morning in January, 1986. My father calls me on the phone, emotion slicing through his voice, “turn on the television, Cali, we lost Challenger.”

That was our Challenger. They were our astronauts.

My father watched Endeavour’s early flights from home. By now he was too ill to take any middle-of-the-night sojourns to the high desert. These and other memories come flooding back as I watch Endeavour circle the city. I remember my daddy, the “space thing” we loved, the time we spent together, looking up. I’m grateful to him for bringing me to Los Angeles. And I keep those little monkeys, Able and Baker, in my heart too.